This week we have a Q&A with Ian Macpherson who’s been involved in table tennis for 45+ years and has been at our club since day one. Ian has been involved in coaching all the players that come through our doors and has played a huge part in the development of the club and players associated with it.

Over the years Ian has represented NATTC in the British League, West of Scotland league and Scottish National league. He continues to captain our WoS Division 1 team and all of our top players owe Ian a huge thanks with the time and effort he has given them. Read the Q&A below about Ian’s playing career, influences, what keeps him motivated and the changes to the game over the years.

What age were you when you first won the Ayrshire Singles?

Other than your dad, who else influenced your table tennis career?

My dad was obviously my biggest influence, but we didn’t always agree. He was a defender and I always wanted to beat him by being a better attacking player than he was a defender. One day that happened in a tournament and strangely enough after wanting to beat him for so long, it actually didn’t feel that good.

From an early age I often heard the phrase ‘Spin to Win’. This was the biggest influence on my table tennis style as I wanted to be the ‘spiniest’ player in Ayrshire. I often watched Douglas Anderson when I was very young. ‘Dougie’ played in the same team (Kilwinning TTC) as my dad, he was left handed and his forehand topspin was the best I had seen. The third player in that team was Norman Kowalski who I later played with in both Ayrshire and West of Scotland league teams for over 20 years. They were all positive influences for me. 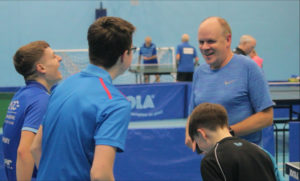 Over the years you have never bothered too much about what bat you use, do you think the new rubbers are really a big help for modern players?

You are right, I have never placed a lot of importance on rubber types. In fact even when playing at a high level the huge variety of rubber types and bat makes described in catalogues actually bored me. It’s the player that makes the shot, not the rubber or bat.  I always simply chose something with good control and lots of grip.

I have also only played with a total of 5 different blades from the age of 9 to now. My first blade was a Butterfly ‘Kenny’ with blue tempest rubbers. Rubbers are now high quality and very fast, but I don’t think they differ that much across the ranges available.

You’ve coached, played in teams with some of the best junior / senior players to come through from NATTC, what’s the best part of playing alongside and coaching these players ?

I have always loved coaching and seeing players of all ages and abilities develop. But playing alongside and coaching some of our younger players has been a really enjoyable experience for me. I believe that the development of our younger players is about more than their table tennis. The life experience and example they are given helps to develop their views and behaviour in a wider context.

The most rewarding period in my career was after dislocating my knee the first time. I stopped playing competitively and concentrated more on coaching. Some of the youngsters I started coaching you might know – Chris Barclay, Jamie Skelton and a certain Andrew Macpherson. James Kennedy joined the team a few years later. These players achieved something remarkable. Aged 8 to 10, they entered their first competitive league, (WOS Junior League) for experience. This was a steep learning curve, but they won this league in their second season. They progressed to the senior WOS 4th Division and challenged themselves not to come last. They succeeded by coming 2nd bottom and the following season they won the 4th Division. The following year they won the 3rd Division which was followed by winning the second Division. I have never heard of such an incredible progression through the leagues with the same squad of young players.

Driving these players for all these years to league matches and tournaments all over Scotland and never hitting a ball was strange. But it gave me the most laughs, made me the most nervous and I experienced the best highs of my career. 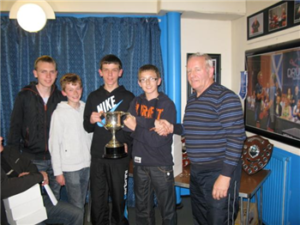 You were due to represent the WoS in the Inter League, sitting 3rd in WoS SL Div 1 and were involved in the promotion in Scottish National League. What keeps you motivated to keep playing and keep winning?

I love the competition, gamesmanship and the psychology of matches. I was lucky in my career to beat many better players due to my overall approach to a match and was mentally better than others who had more talent.  The match starts before you take your tracksuit off! And every single point counts no matter the score.

But my biggest motivation now is playing in part of a team. I enjoy winning as a team and the feeling you get from that which is much more satisfying than individual competitions in which I no longer play.

I have been so lucky to play with some amazing individuals over the years and have learned so much from them. My current team of Jamie and Ryan has been really enjoyable. My drive is trying to stay good enough to earn a place in the team when all our players are improving so fast.

My most enjoyable season since I started playing competitively again was my first year back, playing in WOS Division Two with Jamie Johnson and Jill Taylor in 2017/18. A really diverse team, the old guy, the up and coming youngster and a young female player. 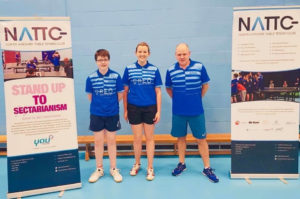 You’ve been invovled in TT for 47 years. and seen the game evolve. What sort of big changes have came about in table tennis ?

The biggest changes since I have been involved in TT was the huge advancements in TT rubbers, speed, grip and increase in sponge thickness which increased the speed of the game significantly. But this led to much tighter controls of equipment such as a maximum sponge thickness then, ‘glueing up’ then being banned.

The ball has obviously changed a lot. Some of our more mature players will remember the Barna Dunlop Super Crown which was made in England. This was a heavy plastic ball which is more like a pool cue ball compared to the celluloid balls of today.

Playing wise, players are much more professional now but not any more dedicated in my view. Training at club level across Scotland has improved enormously. This is due to better qualified coaches, more tables/equipment, more table time and better facilities. When I played as a junior in clubs at Ravenspark Academy in Irvine, Dirrans Youth Club and Blacklands Primary School in Kilwinning they had 3 or 4 tables for over 30 players. You were lucky to get 3 x 15 minute sessions a night.

Due to improved coaching, players’ techniques have improved but we have also lost some of the individuality of styles such as defenders, all-rounders etc. The tactics have moved with the advancement of the game. 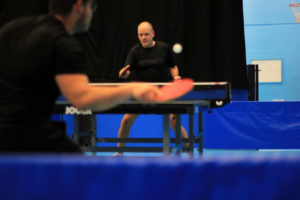 For past couple of years, you have been chairman of Irvine TT Club which is now a popular weekly club. What’s the plans for the future for ITTC?

The future is looking good. We have a very good and talented committee in place led by John Smith and Graeme Stevenson. Chris Main is the club coach who has been committed to developing our new younger players and our new and returning adults along with other projects in the community.

The plan is to build and sustain the positive start we have enjoyed and to encourage more new and returning players to the club. The club benefits from a range of abilities, ages and dedicated volunteers. We will continue to attract new members targeting young people and adults over 50 to the club. 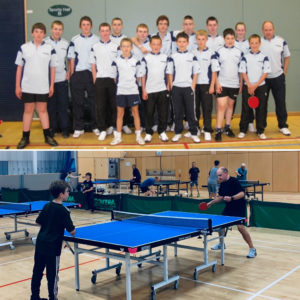