During the enforced down time we are going to create some interest & fun by posting a daily story about our club, volunteers and players . We will put up some quick question and answer interviews from a number of people who represent our club at all levels. Highlight the work of of our hard working volunteers, publish a few old pictures from the 2000-2010s and upload some videos from British League, National League and West League.

First interview is 17 year old Alex Gracie who is currently a senior pupil at St Matthews Academy and since starting has played in various different teams in our club. Alex completed his UKCC Level 1 coaching course and first aid qualification in 2019. Since then he has been helping out Chris Main in various coaching sessions in his school and others venues.

Q. Why did you start playing ?
Started because I needed a new hobby and the sport has always interested me.

Q. Favourite part of playing?
I really enjoy the training part of TT, for example doing exercises, multiball and practise matches as I feel more relaxed and calm during them.

Q. What did you lean from becoming a qualified coach?
Coaching has taught me to be more patient with myself and others. Also that progress and getting better at table tennis or other sports sometimes takes longer than you expect. 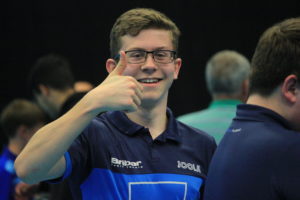