During the enforced down time we have been creating some interest & fun by posting a number of articles about our club, volunteers and players . We will continue to put up some quickfire question and answer interviews from a number of people who represent our club at all levels.

Next up is 15 year old Adam Moore, who has been a member of NATTC for just over 2 years and continues to improve his game at our club sessions and competitions he plays in. Adam is a Stewarton Academy pupil and answers the Q&A on how he got into table tennis, his favourite parts of training and the competitions he has played in.

When did you start playing table tennis and how long have you been playing ?

Why did you start ?

I started playing because I was interested in the sport and I enjoyed playing it at my school lunch club with a couple of friends. I then decided that I wanted to learn how to play more seriously and play at a more competitive level.

What leagues / competitions have you played in and what do you play in now?

I’ve played in a lot of competitions, some regional and some national: I competed for NATTC in the WoS Junior League in Glasgow and have played in some of the national ranking tournaments such as North Ayrshire Open, West of Scotland Open and WoS Schools Competition to name a few.

What club sessions do you attend ?

Initially I attended the beginners club at Irvine TTC on Tuesdays and then moved on to the North Ayrshire club night on a Monday night at St Matthew’s Academy as it suited me better. Since the start of the season I have been attending the club coaching sessions on Thursdays which are tough but learn a lot from the exercises and playing good players.

My favourite part of table tennis is meeting different people and having the experience of playing against different clubs and seeing myself improve against a lot of different styles. I like to try and put the things I have learnt in my training sessions into my game during matches.

What do you want to achieve in table tennis ?

In table tennis I want to achieve certain goals such as moving up leagues and divisions also I would like to win different trophies and be the best player I can.

Adam on the multiball at a Monday Night club night 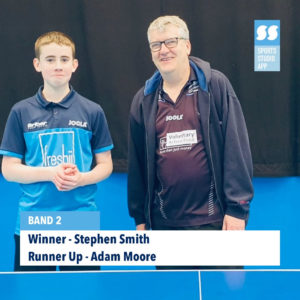