Following a fantastic European Youth Championships debut where he won 50% of his matches in the Cadet team event, Martin has a new European ranking of just outside the top 50 at 56. The Auchenharvie Academy pupil who is ranked no1 in Scotland at u15 level is the highest British player in the u15 boys ranking and is aiming to increase this ranking by competing in two European competitions before the year end.

Another notable recent result for Martin was winning Bronze medal in the singles of the Junior 6 Nations, beating Loui Price, the English no2 in the quarter finals. Narrowly losing out to Irish no1 Art McLauglin in the semi final 3-1. 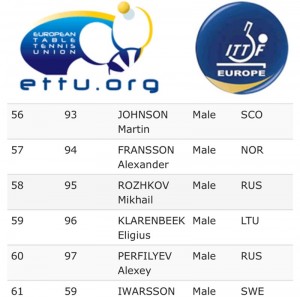