Its a busy season in WOS Senior League, weekly matches both home and away, divisional cup and handicap cup all to play and organise. Top effort from the team captains as always with their efforts being rewarded with good results and happy visiting teams re playing conditions and atmosphere at our club.

NA A team have put in some fine team and individual performances this season, Ryan sitting on 76% wins, Jamie 71% and Ian 66%. The team are comfortably in 3rd place on 82 points, 7 behind 2nd place South Ayrshire with SA having a game in hand.

10 wins from 13 matches put our B team in 3rd place with 76 points, 4 behind 2nd place South Ayrshire and 19 infront of 4th place Joe Wilson A. Nathan, Chad and Kevin are looking forward to their semi final of the handicap cup after beating North Ayrshire A in an epic QF match by 4 points.

Division 3 team are top of the table by 1 point, narrowly infront of Croft. Team captain Alex Hughes is delighted with 14 team wins from 14 and with how Graeme & Derrin are performing after their first season back after a break from TT. Derrin currently sitting top of the player averages with 37 wins from 39.

Our Div 4 team are currently 6th in a 11 team league, their most recent match was a close 5-4 loss away to East Kilbride Juniors. Jess Hogg leading the team with a player average of 73%, followed by Bruce and Alex who are both on 40%. John Smith who is competing in his first season, is finding it enjoyable but tough and is contributing to the team with individual wins. 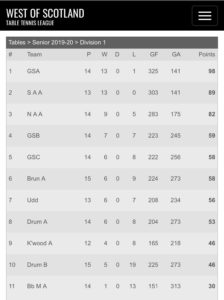 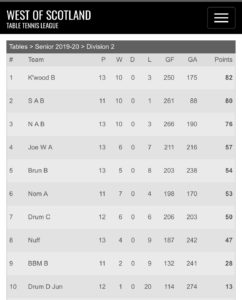 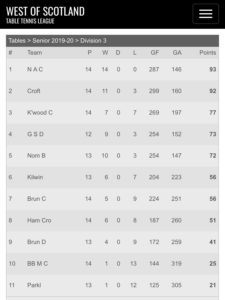 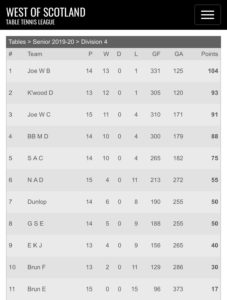