Phil Greenham is coach at West Kilbride TT Club and we sent over some questions to hear about the club and how he got into table tennis. Phil coaches every Friday evening at WKTTC and organises the club as well as the school classes at the primary school. He spends countless hours helping at our club doing a variety of things such as umpiring league matches, setting up the hall and fixing equipment from barriers to nets.

When did you start playing table tennis / how long have you been playing ?

I first started playing Table Tennis when I was at boarding school in England some 60 years ago, it helped to pass the time during long winter evenings. After that I played at and for West Kilbride Youth Club. In more recent years I played at work while off duty on an oil rig. Table Tennis for me has always been a social activity, but competition spirit always comes to the fore.

How did you get involved in TT and how did you come about joining North Ayrshire TT Club?

Once I retired in 2014 I wanted to rekindle my love of Table Tennis, I found NATTC on the web and made contact with the club. I joined the club in 2015 and was made very welcome; I was impressed by the standard of the youngsters who were playing. I was encouraged to play in the West of Scotland league, which I have been doing for the last 3 years. I enjoy playing with some the youngsters who are coming through and some seniors like Bruce McLellan and John Smith.

Your the head coach at WKTTC, tell me when and how it started and a little bit about the club?

WKTTC was set up in 2017 due to the number of youngsters and adults coming to Saltcoats to play and North Ayrshire Table Tennis Club was near capacity. We then decided to look at availability and premises in West Kilbride due to the plans we have in place in Largs and West Kilbride area for table tennis. After securing the Friday night sessions 7 till 9pm at West Kilbride Community Centre we decided to go with this opportunity.

We borrowed 2 tables from NATTC and promoted our new club in the area. Great turnout the first nightand the interest has continued since then with up to 20 players attending every week. We now have 6 of our own table tennis tables and all equipment such nets, bats, balls and coaching equipment.

Most enjoyable part of running the club?

Last year Liz, Marjorie and myself, qualified as Level 1 Table Tennis coaches, with PVG and First Aid so we are well placed to run our club. We find it most rewarding to see how people of all ages can play on a level footing, and the youngsters enjoying themselves and improving on a weekly basis.

We have a great number of volunteers supporting the club putting in many numbers of hours per week and its brilliant to see WK Community Centre being used by top local players to train and coach in during the day or at evenings.

We have many youngsters playing regularly, and 3 current Scottish Internationalist from West Kilbride and many recreational players attending of all ages and many people are attending and making new friends.

Players are also now attending from Dalry, Largs, Saltcoats, with ages ranging from 6-89 years young. We find it most rewarding to see how people of all ages can play on a level footing, and youngsters improve weekly. We regularly have up to 20 people attending the club on a weekly basis.

How do you see West Kilbride TTC develop over the next few years?

Our plan is also to source 2 new tables if we can find storage at the Community Centre. Our session is usually packed out so possibly putting tables downstairs also would develop the club and give players more room to play in. We have introduced Table Tennis into West Kilbride primary school and we have 3 tables situated there for further use. 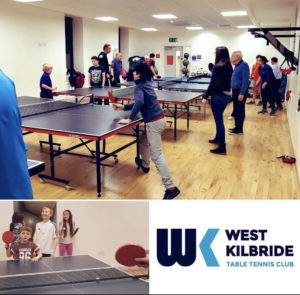 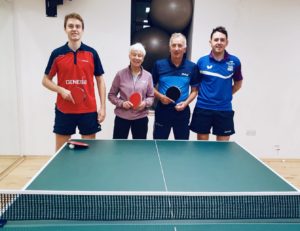