Brilliant quick fire Question & Answer session with one of our top junior players Chad Duncan. Chad has had a great season so far, posting some of his finest wins in the past 6 months at various Scottish ranking events. Most recently reaching the semi finals of the Junior Boys at the  WoS Open and final of the U16 Boys at WoS Schools qualifier.

Chad, currently an S4 pupil at St Matthew’s Academy, is looking to push his Scottish ranking up even further and we no doubt that will happen with the textbook playing technique he has and hard work he has been putting in.

When did you start playing tt and how long have you been playing ?

I have been playing for 6 years.

Why and where did you start ?

I started playing table tennis when Chris and Richie came in to my primary school (St Anthony’s) and done a exhibition and it just appealed to me that day forward.

How often you train?

I currently train Monday at NATTC, Tuesday at Drumchapel TTC and on Thurday I do my 1-1 coaching session with Chris and train at NATTC’s performance session. My WoS Senior League matches are on a Wednesday when we have a home match so I’m mostly playing TT every night of the week.

My favourite part of TT is how tense a game can get, when it’s 9-9 in the fifth set and the opponent is only a few feet away, can’t beat playing under pressure when the intensity builds up.

I play in Scottish National League, British Senior League, West of Scotland senior league and have previously played in the WoS Junior League.

Backhand middle backhand wide forehand then go free as it works on my footwork and consistency. Towards the end of the exercise i can play free to turn it in to match play.

My proudest moment has got to be when I beat Aberdeen’s Josef Bokedal to qualify for the Scottish Secondary Schools team, when he was 2nd seed and I was 10th seed.

What’s your ambitions in TT over the next few years? 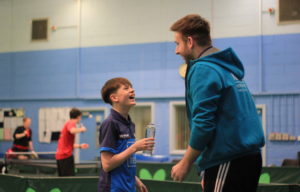