Table Tennis Scotland have been running the #TTSAdvent where a couple of NATTC players have featured in the daily competition.

Day 13 was guess the cho which was recorded pre covid at the WoS Open where the options were out of Edinburgh’s Charlie McGowan, Aberdeen’s Daniel Tibbett and North Ayrshire’s Chad Duncan. Of course it was Chad (pictured below) as the competition winner from that day Callum Riddoch says ” only Chad can get that loud”.

Day 2 was guess the player behind the Santa outfit. Which was Club coach Chris Main hiding behind it (Picture below). A lot of correct answers that day with only a few wrong ones … Get involved on twitter – @tabletennisscot

David Fairholm has hosted his brilliant weekly Zoomcast for 8 months, which started as a way to stay connected in lockdown but has become a much loved regular fixture. The final TTS Fireside session looks back over 29 weeks and 53 guests. This will be on the TTS Youtube channel this coming Monday (21st Dec) at 7pm. 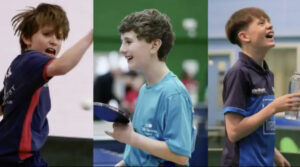 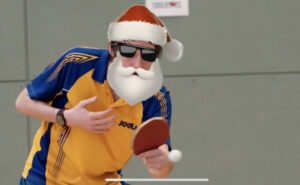 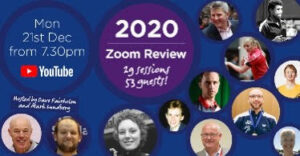